My heart aches these days. And I don’t believe that’s the first time I’ve begun a blog post that way. Political polarization is nothing new to us, it’s been steadily increasing for the better part of the last 15-20 years. It was only a matter of time before it started to bubble over, which I think it is now. I hope it is now, because if this isn’t the beginnings of “bubbling over” I fear what is. Regardless, political polarization is nothing new, nor are the problems before us.

Nevertheless, my heart aches. COVID-19 has no doubt contributed to a communal degree of impatience, anxiety, and frustration in our culture, but the outcries following the murder of George Floyd are not new and are not due to the pandemic. They are the cries that black Americans have been sounding for over 400 years. The breadth, intensity, and depth of those cries vary over time, but they’ve always been there. And yet very little changes.

And so, my aches heart today because of our collective and continual abject dismissal of those cries. I’m not going to claim to have a robust understanding of the Black Lives Matter movement, nor am I going to deny my own complicity and propping of systems of oppression in this nation, but what I’m seeing happen before my eyes aches my heart. Protests have not ceased since George Floyd’s murder, and there is some real beauty in that. The vast majority of these protests and the protestors themselves are peaceful.

But there has also been a rash of property destruction, which if we’re honest has been by some who are associated with BLM and some who are associated with white supremacist agitators. It’s been a mix. Let’s get honest about that. And let’s also get honest that damage of property has real life impact on people, but let’s also get real honest about the fact that damaged property pales in comparison with the loss of a life. Let’s get our anger properly ordered.

It’s quite remarkable. For 400 years black Americans and their African 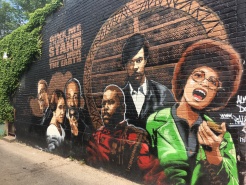 descendants have been crying out about varying and continually reimagined forms of oppression, most recently finding expression in black lives taken by Law Enforcement and vigilantes. But we seem to have more political outrage and political will to fix the property damage issues than we do the systemic racism that continually harms and takes the lives of BIPOC Americans.

White Supremacy is not just guys from Alabama in hoods, friends. That’s the easy stuff to address. It also shows up in the form of shifting the conversation away from how and why a man in Kenosha, WI was shot seven times in the back leaving him paralyzed and fighting for his life, to moving the National Guard in to stop the protests and rioting and calling it a victory. That’s a victory? People cry out, tensions rise, the national guard comes in, essentially garrisoning towns, and this is victory?

I submit that there will be no victory until we actually face our issues, chief among them, the many, varied and insidious forms of White Supremacy that we continually deny and deflect. You see, sending in the National Guard to stop a riot is not victory, nor is it strength. It’s actually a concession and a sign of weakness. It’s a concession in that it’s saying that we can’t or won’t do the hard work to resolve these problems, so we will just control them. And It’s weakness in that it’s essentially waging war on our own citizens; and with all due respect to our soldiers, who do put their lives on the line throughout the globe, war is not a show of strength. It’s a show of weakness. It says “we’re too weak to deal with conflict, so we’ll just snuff it out with power”.

As Peter Rollins so wisely puts it, “Wars are called conflicts, yet war manifests the inability to face conflict: the desire to annihilate the other rather than tarry with difference.” And that’s just it, and is why my heart aches. The local and national response to the outcry right now is one that is unwilling to “tarry with difference”.

Wars r called conflicts, yet war manifests the inability2 face conflict: the desire 2 annihilate the other rather than tarry with difference

So if you’re among those looking at the arrival of the National Guard in Minneapolis, Washington DC, Portland, Kenosha, and others as a victory, I urge you to think again. Maybe it needed happen, but there’s nothing to celebrate here. It is not victory. Nobody’s winning. It is a sign that the pledge for “liberty and justice for all” is an empty one, as we’re unwilling to deal with the conflict with which we are faced. It’s just easier to snuff it out with power as a facade of strength.

So my heart aches. I want us to be better than this, and I believe we can be. But, fellow White Americans, it’s going to cost us something. We must come to grips with the power and privilege the system has built for us, and let it be deconstructed. And that’s scary, because we’ve found great comfort in those systems for centuries. But by letting them be broken down, what we just might find is that what we thought was comfort was actually the chain of relentlessly working to protect our power and privilege, holding us back from a truly liberated soul. Let’s be stronger. Let’s be freer. Let’s enter into the conflict rather than continually minimizing it and snuffing it out.