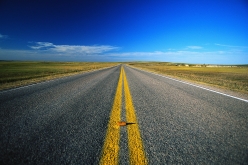 Finally, after 10+ chapters they are heading to Jerusalem. Jerusalem is the religious center of the day, so, as ones starting a religious movement, it’s pretty amazing that they have not yet been there. This alone says something about the nature of this kingdom of God movement. Normally when some one wants to impact and affect change upon an established institution, they head to the center of that institution. If you want to influence the US government, you go to Washington DC.

But the kingdom of God is not like any kingdom of this world. It is something radically different. It happens not by saddling up with the seats of power, but by being yoked with the powerless and disenfranchised. Jesus has spent his time building this movement on the fringes, on the outside. But at some point he will have to deal with the institutional center, and that journey begins here: “They were on the road, going up to Jerusalem.” And as they were doing so, Jesus is as clear as ever as to how this will go: “…the Son of Man will be handed over to the chief priests and the scribes, and they will condemn him to death; then they will hand him over to the Gentiles; they will mock him, and spit upon him, and flog him, and kill him”.