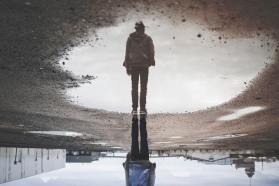 I love that the disciples were “afraid to ask him” about his words regarding being betrayed, killed and rising from the dead. Based on some past behavior I’d say they have reason to be a little afraid. Words like “How much longer must I put up with you” (9:19)
are probably still ringing in their heads. So the disciples move on from their questions and move toward more pressing matters: who among them is Jesus’ favorite. They are pretty much embodying Dwight Schrute and Andy Bernard from the great TV show, the Office arguing about whose title as more authority: “Assistant Regional Manager” or “Regional Director in Charge of Sales”.

But here are the disciples, essentially behaving like children in that they know this is something they shouldn’t be wondering about, so they were silent when Jesus asked them what the were arguing about. You can almost here them going into pig latin about it: “Icksnay on the atestgrey, Peter…” But Jesus knows. And what does he do? He turns yet another cultural norm on its head: “Whoever wants to be first must be last of all and servant of all”. Then he picks up a child and says, “Whoever welcomes one such child in my name welcomes me, and whoever welcomes me welcomes not me but the one who sent me.”

I said earlier that they were acting like children. Children were not held in high regard in those days. In fact, they were seen in a very low light, perhaps maybe just above a pet- loved and cared for, but not dignified. Jesus says that we “must be last” and then he equates himself with the last- with a child. And not only does he equate himself with a child, he puts God Almighty on this level as well: “whoever welcomes me welcomes not me but the one who sent me.” Jesus is once again turning this religious version of a kingdom of the world upside-down and inside-out.

A friend of mine once wisely said to me in a conversation “always be skeptical of those seeking higher office in the church”. I think this is a reflection of what Jesus is saying in this passage. If our level, our office or our position is what matters to us, then we are in trouble. It’s ok to get promoted, but when that promotion, title or office is what gives us our value and worth in this world, we have completely missed what the Gospel of Jesus Christ is about. It’s about one who (according to Matthew) has been given all authority and lays it down in sacrificial serving love.

When we are seeking “higher office” we are walking on the thin ice of falling into being more worried about what I am ascending to rather than what I am laying myself down to. When we are trying to ascend, we can easily and naturally do so by trying to place others below us, and this is antithetical to the Gospel of Christ. The Gospel of Christ is about doing what Jesus did, which is taking the privilege and authority we have and using them not to ascend, but in laying ourselves down to empower others.  What if we all, myself included, were guided everyday by the thought, “how can I empower another today?” What might the world look like then?