As I said in my message on Sunday, I really don’t like this story. I find it disturbing. I can’t get past the pigs. I have had endless conversations and have read numerous commentaries on the whole demons into the pigs and the pigs die part of it. Nothing has satisfied me. But also as I said in my sermon on Sunday, what is maybe the most 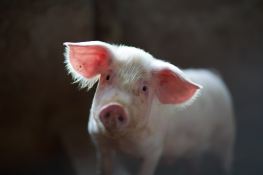 disturbing part of it is not the pigs, but is this man himself, and the fact that I’m more concerned about the pigs.

Too often I read stories in the Bible and I let human horrors glide right by. I worry about the pigs, but not the human. “Well… it is the Bible, after all.” The more I play this out, however, the more disturbing it is. This man is possessed by demons, presumably a lot of them. Jesus asks the man his name and he says  “Legion”, which indicates a legion of soldiers. Just as the land is occupied by an outside force, so too is this man. And his possession is so great that he has completely lost control of himself, to the degree that the text tells us “no one had the strength to subdue him” and that he bruised himself with stones. So what did they do? They chained and him and shackled him among the tombs.

Beloved, this is a human being. My wife works in inpatient psych, and she can tell you that there are times when we need to physically restrain someone… like in actual restraints. But of course that work today is done in a far more humane way, with processes to guard the dignity of one’s humanity and to work for healing. But in Jesus’ day, they didn’t know what to do. There was no medication they could give him to calm his body. He was simply possessed by demons. And evidently all this town knew to do was to chain him up, where he could do no harm to anyone else: That is, among the already dead. I’m not sure what the answer could have been in those days, but there had to be a better option. This is a human, on whom the community gave up, effectively transformed into a wild beast, and named as dead by shackling him among tombs.

I know this is a story about a man possessed by an outside spiritual force, but knowing what we know today, I can’t help but simply think that he was severely mentally disturbed. They couldn’t have known this then, but we do now. We’re learning a lot about mental illness, thanks be to God. And science. And I say all this, because while this story is about many things, maybe it disturbs me so much as it does, because it’s staring us in the face, asking us, “how do we see and treat those battling with mental illness today?” It’s easy for us to dismiss the way the community treated the man if he is possessed by a legion of demons. But what if he’s simply mentally ill? That’s lands different.

We are doing a lot better than we were even a mere 10-20 years ago, let alone 2,000. But we’ve still got a long way to go. We are not chaining people among the tombs, but I believe there is a way in which we are still chaining people in the stigma that still exits when it comes to mental illness. Let’s not let 2,000 year old stories be our benchmark for combatting mental illness. Let’s hold a fully redeemed and liberated humanity as our benchmark.