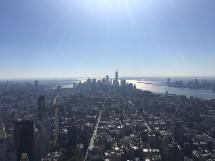 So it’s been over a month since I posted the last installment of “Reimagining the Gospel”. This little thing called Advent and Christmas kind of hijacked my writing mojo. So far we have dealt with the idea that the Gospel must begin wherever a person is (“Here”), that the “good news” is that our primary identity is “Beloved”, and that sin is a reality but it’s not about breaking rules as much as it is denying our true identity. So what’s next? Well, that’s the question. What’s next? What’s next is the way in which we live out this identity.

This idea that what is most true about us is that we are the “Beloved” and that we are worthy of that love, runs the risk of becoming an entirely internalized and individualized notion. And while we need to internalize this and claim it individually, it cannot stop there. Belovedness suffocates within us if it is never breathed out in community. This idea of belovedness is not just a nice idea to make us feel warm and fuzzy, but it’s actually how it is that we live and move through the world together. This thing we call “our faith” is not personal but necessarily communal. And its greatest enemy may just be the kind of proud individualism out of which the bedrock of the “American Way” is built.

When I read the Book of Acts, one of the things I see is an authentic community of people, wholly (and “holy”) dependent on one another not only for their faith in Christ, but for their regular daily living as well. The classic passage at the end of Acts 2 says “All who believed were together and had all things in common; they would sell their possessions and goods and distribute the proceeds to all, as any had need. Day by day, as they spent much time together in the temple, they broke bread at home and ate their food with glad and generous hearts, praising God and having the goodwill of all the people” (Acts 2:44–47 NRSV).

It’s funny: When I read this passage in suburban American contexts suddenly the Bible is something not to be taken literally. A man living in a fish for three days, yes, that is literal, but “holding all things in common”  and “selling possessions and distributing the proceeds to the poor”? Slow down, sailor. We can argue the merits of free market capitalism as the only or best way for a nation to operate, but as Christians, we must wrestle with the idea that there is something in it that is distinctly un-Christian. Or that at least leads to something distinctly un-Christian, which is a fierce individualism that keeps us from not only sharing resources but sharing our very lives as well.

Later Christ dies, ascends to heaven, and then sends us the Holy Spirit in a new fresh and powerful way, and what’s the immediate outcome of it? Being together, sharing life together, living communally. And living communally to the point where the ritual act that differentiates these “Christian” Jews we call the “early church” from more mainstream Jews of the time is what we call today the Eucharist. The Lord’s Supper. Holy Communion.  The primary ritual act was a meal shared together.

This speaks to the way in which our faith is communal, is relational. And this relationship is not just something we do for an hour on Sundays. It’s the whole of the faith. It’s what defines the faith. The way we live out Belovedness is by being so enraptured by it that we live in intimate, generous, honest, and fearless love toward one another and with one another in this world. It means that we recognize that we are all in this thing called life together. It means that we live closely and intimately with those in our faith communities, being what Eugene Peterson calls in The Message translation of Acts 2, “deep-spirited friends”.

But it also means that when we’re out in the world, out in the marketplace, that all those with whom we interact are treated as the Beloved as well. The gas station worker, the loan officer, the car who cut me off (I know.), high schooler not giving a crap about the road and just crossing the street to get to McDonalds without a care in the world, the annoying guy in the cube next to me, the stray dog, my literal neighbor, the grunter at the gym, even the very soil and water we need to survive are to be treated as God’s Beloved. Because they are.

This sounds nice, and it is, but it’s also tough. You see, when someone “has need”, that is, when someone doesn’t have enough, when there isn’t enough food in their cupboards or a sufficient roof over their heads or proper clothes on their back, it becomes difficult for them to know that they are the Beloved. There is a message embedded in it that you don’t matter. So not only the marketplace, but the very structures that govern the marketplace are in need of deconstruction of individualism and a reimagining rooted in belovedness.

We need each other. We need to share in our belovedness. We need to reclaim the communal nature of this faith. We need to understand that this world, the whole world, from the small farmer way out in “flyover country” to the biggest most populated urban centers, are part of one connected and communal system. We need to be a part of that system (because we can’t not be), but we also need to take critical looks at the ways that system can hijack communal belovedness.

When we come to the communion table, we are not just performing some ritual act of forgiveness. No, we are claiming that we are in this together. We are making a bold claim that God is not only present in the bread and wine, but is also present in you and in me. This is why we pray “pour out your spirit on us gathered here and on these gifts of bread and wine…” In order to experience the fullness of God’s presence in my life, I need to experience you in my life. Every encounter we have with another human is sacred. It is holy. For we, that is, we humans, are the Body of Christ, and therefore we cannot live out this faith without living in and growing in such a community.

[Stay tuned for the final installment of “Reimagning the Gospel” entitled “Good News”, wherein a will reimaging the “e-word”.]