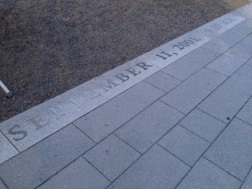 UPDATE, 9/11/17: Today is September 11th and I thought I would return to this post. I am reposting it today, because I think it’s important that we think about these things and not slip into false senses of unity. But I also want to reach out a hand to those today who still grieve. If that’s you, do what you need to do today: Laugh, cry, be with those you love and trust, remember, forget… Just do you. I am so sorry for what you lost 16 years ago.

Also, one other note about the piece below. I had no idea when I wrote this that something like the KKK would resurface in this country as it did in Charlottesville a month ago. But with the reality of a re-energized hate group in mind, my point below still holds: We have to move toward one another, and not let fear drive us and divide us. 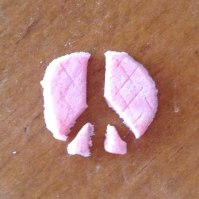 The terrorists are winning. And we’re letting them.

Our nation changed on September 11, 2001. We know that. And it was a truly amazing time. We had just gone through the closest presidential race in American history. It was so close in fact that it took not until the next morning to decide, not even until the next week, but until the next month to decide. Ultimately George W. Bush became our president, and the left was scared. Where would this go? How would he lead? As I recall the usual Democrat vs. Republican arguments took place throughout the first few months of Bush’s presidency. Then terrorists flew commercial airplanes into the Twin Towers (ultimately toppling them) as well as the Pentagon, and attempted to fly one into the White House.

The nation changed in a moment, and we all knew it. President Bush’s approval ratings

nearly doubled overnight, going from about 50% to 90+%. Some of my most liberal, Bush-hating friends even said, “we just have to trust that he knows what he’s doing.” It was amazing. The country was coming together like we had never seen it before. We were more the United States of America than I have ever seen. We were like an awakened giant, who was ready to rise and shine like never before.

It didn’t last long. As President Bush led us into war with Iraq less than two years later, the age old divide seemed to be back. Except it wasn’t quite to same “age-old divide”. Something was different. Since about a year into the Iraq war, we have been on, as I’ve experienced, the steepest, fastest, and deepest downward trajectory toward division than we’d been on my whole life, perhaps longer- perhaps going all the way back to the Civil War.

Friends, the terrorists are winning.

Oh sure we got Saddam Hussein, and we got Osama Bin Laden, and we got who knows whoever else. But have we ever been more afraid? We may have felt strong and united for a few months after the attacks on September 11th, but the truth is that since then we have been afraid. Politics has been driven by fear and it is killing us- in many cases literally. We’re afraid, and our whole political realm is operating out of that fear. And when people operate out of fear, generally bad things happen. We go into survival mode. We go into self preservation mode. We fight, we claw, we run, we hide, and, perhaps most tragically, we demonize and vilify anything that looks, sounds, and behaves differently than we do.

The terrorists have done, and are doing, exactly what they intend to do. They’ve made us afraid. That is not to say that there isn’t anything to be afraid of. But it is to say that when there is something to fear, we have to be very careful. Franklin Roosevelt famously said, “the only thing we have to fear is fear itself”, but I don’t know that he was entirely correct.

I think FDR was wrong in that fear isn’t the only thing we have to fear, but he was correct in that fear is the primary thing we have to fear. This is how the terrorists are winning. Since September 11th, even with a two term president who ran on the “audacity of hope”, our driving motivator in this country has been fear. The Republicans made us afraid of a Kerry Presidency. Then they made us really afraid of an Obama presidency. This year, they stepped it up a notch creating a sense that United States would crack and fall off the face of the earth with a Hillary Clinton presidency. They tried to make us afraid of these people as the primary means to convince people to vote on their side.

But before the democrats get too haughty here, they did the same thing. They bred incredible fear in us about a second Bush term. They made us afraid of a McCain/Palin white house (“she’s one heartbeat away from the oval!”). They bred incredible social and economic fear in us over a Romney presidency, and, well, look how the last 18 months went. Fear. Be afraid of that one. Be very afraid.

That being said, I do believe that there is more to be afraid of with President Trump than any one in my lifetime. Don’t hear what I’m saying as a “calm down, everybody” moment. The rhetoric in his campaign is not only incited fear but anger and violence (if you don’t know what I’m talking about, then you are either in total denial or are living under a rock). And, contrary to most presidents, he’s making good on his promises. If you ask me, this man is- to use one of his favorite phrases- a total disaster.

But even though I believe there is reason to fear this Trump presidency, letting that fear guide us is the worst thing we can do. It has gotten us nowhere in the last 16 years. All it has led to is a greater divide, and with that divide only comes increased fear, which only increases the divide. I believe that what led us to a Donald J. Trump presidency (something that was a punch line at best and mostly unimaginable 17 years ago) is fear. And what I fear now is that we will do what we’ve been doing these last two decades. We will continue to swing the wrecking ball of fear between us with increased force and in so doing continue to wreck this nation in which we live and which we call home.

Again, I want to be clear. A Trump Presidency appalls me. This man has made my flesh crawl since the early 2000s when my wife and I used to watch “The Apprentice”. I think he’s a clinical narcissist, and in that is entirely psychologically unfit for the presidency, and I genuinely fear where he’s going with this. So in no way am I saying that we shouldn’t resist, that we shouldn’t march, and that we shouldn’t have our guard up. We must.

But we also need to look at what led us to him. It’s fear. It is letting fear be our guide that has led to the increasing chasm between us, and I think the terrorists are now just sitting back on their barcaloungers with their feet up, sipping a cool drink and relaxing as we tear ourselves apart. Somehow in these trying times we have to rise above our fear and move toward one anther again. I’m not saying we need to accept pu**y-grabbing and whatever it was that Hillary did that was so horrific that no one’s ever done before. But I am saying that we need to move toward one another, get back to real conversation and debate, and in that rise above our fear. Fear is the terrorist’s means of control. It’s all they’ve got. Let’s not give it to them. Yes, we can and should be afraid, but we cannot- cannot- let it drive us anymore.

In this, the terrorists are winning. But it’s not over. The choice is ours, not theirs. There’s still time, but we need to make a radical course correction right now. We need to find a way to talk to each other again- to listen to one another- to, quite simply, not be so afraid of one another. That is not to say that we need to agree nor is it to say that we shouldn’t challenge one another, but we have to do it without letting fear be out pilot.

That’s how the terrorists are winning. They have bred such fear in us, that fear is driving us, and in driving us it has become our guiding value in policy, in action, and in how we relate to another in our day to day lives. The terrorists don’t need to attack us anymore, because we’re attacking one another (and let me be the first to admit that I’ve done this, even as recently as yesterday) . They put a giant chasm of fear between us, and in our fear, we are running away from the chasm’s edge, sheltering ourselves with only with those who think, act, and sound like we do, and in so doing we are continually widening the chasm until there is nothing left and we all fall in.

That woman in the hijab over there? She’s not hiding a bomb in it. That guy in the big truck with a an eagle and American flag in the back window? He’s not in the KKK. That women in the hijab? She just wants to work hard, earn a living wage, provide for her family, and love her neighbor (and perhaps also run for public office). And the guy in the big truck? Same thing. She’s not your enemy. Nor is he.

Do you know who your enemy is? The voice telling you that she or he is your enemy.