It’s been a helluva year. 2016 is one that will certainly go down in US History books for obvious reasons, but even if you remove the election, it was still one helluva year. Every now and then at the end of a year I do a little “looking back” (or as the wise sage Yogi Berra once said, “looking back in retrospect”), and just in case something happens, I usually wait until the year is completely over to do so. Here we are, five days still left in 2016, but I’m feeling compelled to reflect. Maybe because it’s been such a year, that I just can’t stomach another thing in these five days. So here I go:  But where do I start? Not sure where to start, I went back into my Twitter feed to the beginning of 2016 to see what might’ve been stirring in me and in the world at that time. That’s one of the things I love about Twitter… that question it asks: “What’s happening?”

When overwhelmed, do I have the strength, like Mary, to turn away from anxiety and toward wonder? #ALookAtLuke https://t.co/yQIkdfIARt

I have been saying to my congregation since the Republican and Democratic conventions that I do not recall a time in my life when this nation seemed as anxious as it does right now. There is a tension in our nation right now that is so thick that you can almost feel it in the air we breathe. On January 4, 2016 I had no idea just how anxiety-inducing this year would be. I don’t need to replay it all for us, but let me just scratch the surface on a few things that struck me in particular.

The Election: It is the #1 story of the year, without question. All along Donald Trump was making noise, and if you could look back on conversations with my friends you will hear me saying, “everybody calm down… after the New Year, when there are actual primaries, America will wake up and Trump will disappear in no time.” I could not have been more wrong. I shoulda listened to my friend Joe, a bonafide prophet, who kept saying, “I don’t know, we need to be careful.” In the end, this election bred deep anxiety on both sides of the political aisle. The left was (and is more so now) terrified of Trump (and there are reasons to be so), and the right was terrified of Hillary (decades of loathing doesn’t just go away). The tension is thick. 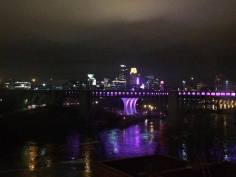 Prince: We had already lost Bowie and Snape and George Martin, as well as some others, but for me, this one hit hard. I didn’t see it coming, but Prince’s death hit me like a tidal wave. And in some ways, you got this sense when he died that something was up with 2016. It was only April, and you just knew that it wouldn’t be the end. Muhammed Ali, Gene Wilder, and Leonard Cohen, were just a few others that struck me after Prince died, and then, just yesterday, George Michael. I don’t know what the Grammies are gonna do with their memorial segment. It could take up the whole show. Sometimes it snows in April.

Jacob Wetterling: This is how huge this year was. Locally this was a huge story, and I almost forgot about it. His disappearance gripped the state of Minnesota and was for decades considered our state’s greatest mystery. That mystery came to an end in September as Jacob’s abductor and killer finally came clean (as clean as a “deal” can be), confessed, and revealed the location of Jacob’s remains. My only solace in it was that at least Jacob’s torture was only for a night. I had longed feared that he had endured, or even was enduring, decades of torture. That weekend, it seemed the entire state shone brightly with porch lights of hope for all missing and abducted persons. This was a pic I tweeted of my neighborhood that night. Not a great pic, but a powerful image.

The pic doesn't do the beauty of it justice, but nearly every light on my street is on tonight. #jacobshope pic.twitter.com/fBZtM9Vs4G

The Cubs: This team just can’t buy a break. One of the greatest stories in sports took place this year, as after 108 years of choking, the Cubs finally won it all. And, yet, even when they win, they lose: The win itself was unforgettable, but it also came in one of the best game 7s ever (as a lifelong Twins fan and attendee of the 1991 game 7 I refuse to give this year’s the top spot alone!), and a week later it was gone- lost in one the most gripping presidential elections in US history. Everybody, in a year that was loaded with so much anxiety, let us not forget the joy of the lovable losers finally winning it all! Go, Cubs, Go. Hey Chicago, what d’you say? It’s been a crappy year. So, Chicago, don’t feel guilty about boldly and joyfully flying that W.

Standing Rock: I don’t know what it is, but something clicked in me when violence broke out int eh DAPL standoff on late October. Shortly thereafter there was a call for clergy to come, and I knew Just had to go. This important story also got lost in the election, but if you ask me it was one of the most significant stories of the year. I am still frustrated with President Obama’s silence. I wrote a few pieces on the situation there. Here’s one. And I’m sure some dumb pic of Trump or Hillary will win it, but if you ask me, this is the pic of the year: 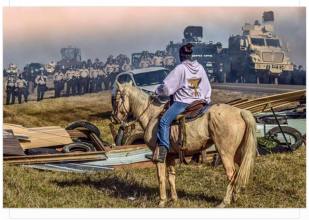 And in the context of the image above, this is a close second: 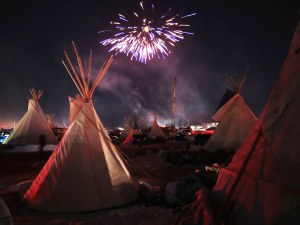 Alton Sterling, Philando Castille, Dallas, and Black Lives Matter: The movement and struggle for black lives continued in 2016, and without getting into the depths of it, I think it’s safe to say that anxieties are high in this nation when it comes to race. Many of us thought Martin Luther King’s dream was realized in January of 2008 when we inaugurated a black president, but 2016 was another reminder that racism is so deeply embedded in the fabric of this nation that not even a black president could neither cure it nor realize its end. I’ve struggled with the movement for black lives, not quite getting exactly where I land on it and what my voice in it is. I transferred seminaries from Luther Sem in St. Paul to the Iliff School of Theology in Denver this fall and I took advantage of a class offered at Iliff called “Black Lives Matter”. It was the hardest class I’ve every taken in my life both academically and emotionally. I learned a ton, but I think the most important lesson I learned was this: Fellow white folk: We need to shut up and listen. Really listen. Just. Listen.

I could go on. From meaningful celebrity deaths, to an anxiety plunging election, to broken sports curses  getting lost to centuries long plights for black, brown and red lives, 2016 was a heavy, heavy year. When I look back on the words I wrote on January 4, 2016, I realize that more often than not, I did not do well in turning to wonder when overwhelmed. I turned to anxiety, to fear, to judgement, to slander, to rage, to despair, and at times to hate. I don’t know that 2017 will be any less anxious for us. We are a divided people. A great socio-political chasm exists between us, and our best hope is- perhaps- not to continue to dig our heels in, but somehow to find a way to bridge it. That doesn’t mean we shouldn’t speak- or even shout- hard truths. But it does mean that we should be careful about how we do so. And by we, I mean “we” but maybe mostly “I”.

A good friend of mine does this thing where instead of a New Years Resolution, she picks a New Years theme. One year it was “Look Up”. I’ve adopted this practice, and because I’m a slow learner, I’ve basically had the same theme for the last three years: “Spot the Beauty.” This year, I’m going to heed my own words from January 4, 2016 and head into 2017 with a new theme: “Turn to Wonder.”  With that, I close this quasi-year-in-review with an excerpt from my January 4th, 2016 blog post from “A Look a Luke”:

I love that picture of Mary. She’s a 12-14 year old girl, and she is thinking deeply about what’s happening. In what was probably a confusing  time, she turns to wonder. This has been a hard journey. It’s been long, and it’s been hard, and it’s going to continue to be hard. She was, I’m sure, terrified, uncertain and confused. She had to be wondering what God was doing in all of this. And in her confusion, she turns to wonder. There have been confusing times in my life- times where I have no clue what’s happening, no clue where God is in it, and no clue what might be in store. In those times, I usually turn to fear, anxiety, and even frustration. I pray that I may take a clue here from Mary: When I’m uncertain, afraid, and confused, while there may be fear, can I muster up the strength to turn to wonder? Can I muster up the courage to get outside of myself, step outside into the air, and to look up and into the stars to see just how massive the universe is and how within it, God holds me? Do I trust God enough to turn to wonder? And in so doing to trade anxiety for peace?

Beloved, have a happy, beautiful, peaceful, and indeed wonder-full 2017.