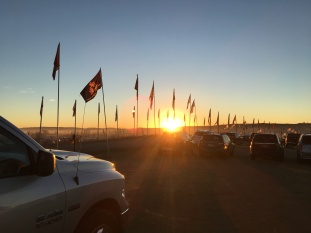 It was just over a month ago that something woke in me and I found myself en route to the small town of Cannon Ball on the Standing Rock Reservation in North Dakota. I’m not sure what it was, but as I’ve said before, something simply lit inside of me and had to become active at some level in advocating for the Standing Rock Sioux on the issue of the Dakota Access Pipeline (DAPL).

Over the last month I have found myself utterly disappointed in both the President of the United States (who, contrary to popular understanding is still Barack Obama) and the mainstream media. Both of them have had their heads in the sand on this issue, no matter what they say. They will cite that the election took precedent, but this is utter nonsense. The election has been over for nearly a month, and the mainstream media cannot stop playing into the President-Elect’s hand as it continues to be obsessed with Donald J. Trump. Let’s get real, media: You love him. You can’t get enough of him. You have been salivating over him for over a year.

As for President Obama: Well, it’s pretty clear where his loyalties lie. Yes, Obama’s silence is proof that we are indeed “one nation, under oil…”. I’ve said it before, and I’ll say it again. We are one nation under god, and that god’s name is Oil. That is who our source of life and wellbeing is, that is who we serve, that is who we worship.

Over this last frustrating month, I’ve been doing what little I can to get the word out, but that’s pretty limited. Finally the media is starting to pick this up a little bit, and the story is getting out there a little more. I was struck today by a piece from the Washington Post that I thought is definitely worth a good look for everybody. It traces several different perspectives on DAPL. I think those perspectives- all of them- are important for us to listen to.

As I read the piece and watched the videos I heard some of the cries of those on the other side from where I am. I heard about how this pipeline has provided thousands of good jobs for people who need it. I heard about its economic benefits to all of us. I heard about the disruption of everyday work, income, and livelihood the protests have created for many hard working and even sympathetic North Dakotans. I heard about genuine safety issues for pipeline workers, law enforcement officers, and even uninvolved citizens. These are real issues, with real people, real faces, real names, and real lives that people like need me need to hear, see, and value.

But as much as I hear them, I simply cannot see any argument to allow this pipeline through. There is a side to this story that I think (and seriously, no pun intended) trumps everything else. It’s a side of the story that we all know, but we simply seem unwilling to do anything about, and of which we live in abject denial of. It’s this:

Yes, there may be some violent protestors, and yes that is wrong. Threats and physical attacks by protestors on pipeline workers, law enforcement officers, and government officials is wrong and should be condemned. It is not what the people of Standing Rock stand for, and it should be boldly and clearly condemned, and those people should go home. And, yes, this pipeline has created jobs, and, yes, this pipeline will likely benefit the US economy. All of that may be true.

But when we’re saying things like “these protestors are impacting people’s livelihoods who have nothing to do with the pipeline”, what we’re failing to recognize is the history in which we are still living today that violently took this land from these people and ruined their very way of being. We’ve been disrupting their livelihood and lives for 500 years. It’s our turn. Maybe it’s time that our lifestyle takes a hit so that we can begin to right the 500 years of wrongs we have inflicted on Native American cultures. It’s time for us to perhaps lose the job, see gas prices rise, and even watch our economy weaken so that we can- for once- do right with Native Peoples.

The minute these people said “no”, we should have stopped and said, “you know what: You’re right. We’re sorry. We’ll stop digging.” And we should have done this for no other reason than all we’ve done for 500 years is trample over and dig up Native Peoples’ land, culture, livelihoods, and lives. It’s time for us- the people of the United States of America- to take the hit. Enough is enough.

Two years ago President Barack Obama stood on the Standing Rock reservation pledging to have their back. I believed him. And I believed in him. I’m ashamed today that I ever trusted this man, and, quite honestly, any other soul that will sit in the Oval Office. I’m embarrassed that I believed him. When it comes down to it, we as a nation have never had, and appears will never have, the backs of Native People. President Obama’s silence is, to me, the sign, sealed, and delivered message that we really don’t care about Native American’s Lives. We don’t. Just look at our receipts for the past 500 years.

We will pay them lip service, but when it comes down to it, we will bow down to and serve our god ever faithfully: We will serve whatever it is that benefits us economically at the time, which right now is the god called oil. And we will, as we are doing right now, trample over whomever we have to in order to worship this god. Today, as it hs been for 500 years, it is those who are native to America over which we trample. Enough is enough, America. It’s time for us to take the hit. Stop the Dakota Access Pipeline now.