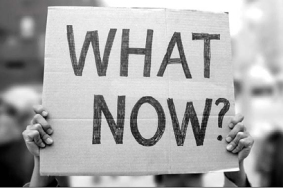 I’ve been trying to find words. Words are how I make sense out of things, and all week I’ve been trying to find the words that will make sense out of the insanity that this presidential election has brought. But I’ve struggled to find them. I’ve been sitting in front of my computer all morning trying to find them, but they don’t seem to come in any coherent way. I guess because there is little sense to be made out of what’s taking place in these “United” States of America. Regardless my soul needs words (even if somewhat raw and unrefined as these), and my soul needs to send those words out somehow, even if it is merely like a message in a bottle doomed to floating on an empty sea for eternity. So here are my words…

We’ve got problems, America. As much as Trump appalls me (and has since I watched “The Apprentice” back when he was mostly just a blowhard reality TV star and real estate huckster), he is right about one thing: America needs to be made great. Now I won’t say “great again”, because I’m not sure of the time when we were great, but I don’t want to get into that history right now. Suffice it to say that whether it’s “great again” or merely “great”, what Trump’s campaign slogan got right is that we as a nation have work to do. A lot of work. And in saying that, don’t give me the “why don’t you go live somewhere else” crap, because all that is is a not-clever way of shutting down hard but necessary conversation. I say that America needs to be made great, not because I hate America, but because I love it. The sooner we come to grips with the fact that we have real problems, the better. I’ll be honest: After an entire morning of several attempts at analyzing those problems, trying to find their causes, and then drawing on some kind of hopeful solution, I’m stuck. That is not to say that there isn’t a solution, but I’m stymied.

But here’s what I do know. The fear, hate, and violence has to stop. I’m just going to throw this out there, because it’s all that I know.

Those of you protesting Trump’s election, don’t stop. It’s your right to publicly assemble

and make your voice heard. Especially those like the gathering of Minneapolis High School students yesterday who have no vote. Get out there and make your voice heard. Don’t listen to the “he won fair and square, get over it” rhetoric. I’ll confess that he did win, and won legally. We can argue the merits of some voter laws in some states, but he won. But that doesn’t mean you have to get over it and be quiet. To a certain extent, Congress does. They need to get over it and for the sake of our country get to work, but as a private citizen, you have every right to get out there make your voice heard. But when you do, don’t destroy and burn stuff. Violence is not the answer. It never is. That doesn’t mean you can’t shut down a highway. That may be illegal, and to a certain degree dangerous, but it’s not violent. I have mixed feelings about shutting down highways, but a non-violent protest does not necessarily mean only a legal protest. Just know that if you do choose to do things like non-noviontely shut down a highway, you may get arrested. You have the right to assemble, but if you break the law in doing so, you can get arrested. You’ll need to deal with that, but deal with it peacefully.

So, Trump protestors, stop burning things, destroying property, and above all else, stop attacking Trump supporters. That is happening, whether you want to admit or not (it’s happened and they are so horrific that I don’t even want to link it here. Google it and will have no trouble finding them). Stop doing it, and furthermore start condemning the actions of those who do. You don’t have to like Trump supporters, you don’t have agree with them, you don’t have to be their friend, but you have no right whatsoever to threaten or harm them in any way. Stop it, and stop it now. I know you’re angry, and it’s ok to be angry, but you must not manifest your anger in physical attacks or threats. Stop it and condemn it when you see it.

To you Trump supporters: Climb out of your holes and stop denying that your fellow Trump supporters are engaging in a rash of hate crimes, vandalism, threats, physical and sexual assaults literally in Trump’s name across the nation. Is happening and

collectively, you have not only been silent about it, you’ve been in abject denial of it. Not only that, President-Elect Trump has been silent about it. What you need to understand about those protesting his election, is that they are not protesting the merits of the election as much as they are protesting that these hate crimes, threats, and assaults, which many of us believed would come because of a Trump presidency, are actually coming. Yes, Trump tapped into what we often call “working class” America in a particular way which Hillary Clinton could not, and which got him elected, but that is not what the protests against him are about. They are about the violence he incited in his campaign toward certain people groups in America. You cannot- cannot- deny it. We saw it in his rallies. He made a promise to ban all Muslims from coming into our country. This distinctly un-American. He promised to build a wall, when the Republican hero’s (Ronald Reagan’s) most famous moment was the call to tear one down. Furthermore he encouraged violence towards his protestors by saying things like “I’d like to punch him in the face”, and, “in the gold old days, he’d be carried out on a stretcher” (If you need me to prove to you that he said these things, then you simply have not been paying attention and were an uninformed voter- look it up). The President-Elect incited violence, and that violence is manifesting itself across the nation, and he, along with his supporters are hiding from and denying it. This is not a “well, we’ve all sinned haven’t haven’t we” kind of moment. This is the President-Elect of the united states endorsing hate crimes, threats, and assaults on other Americans, and if he is not going to condemn it, you need to do it, and you need to demand that he does.

All of this is to say this. Post election (any election) there is little that we can do about what happens in Washington. We should never stop making our voices heard, no matter where on the political spectrum we fall, but in the end- that is, post election- there is little we can do. But what we can do, and what we must do, is stop the fear, hatred, and violence toward one another. Our reciprocal fear of the other, our hateful vitriol toward those who think differently than we do, and our physical destroying of one another and property is something over which we do have control. I am not asking anyone to compromise your beliefs. Stand up for what you believe in, but do it peacefully. Do it boldly, but do it peacefully. Death, assault, hate crimes, destruction… these have to stop and stop now.

I don’t know what the answer is for America right now, but I know that we have serious, serious problems. I love this country. I do. But I am ashamed of it right now and have been for some time. Right now, I am not proud to be an American. It is disingenuous to even call us the “United” States of America. Today we are the Untied States of America. I don’t know what the answers are for what will truly tie us together, but I do know that step #1 is stop beating the crap out of each other. You on the right may not like this, but Hillary Clinton preemptively condemned beating the crap out of each other in her concession speech. And I, as one who voted for her, will publicly and boldly condemn the actions of those who have assaulted Trump supporters. I am still waiting for even one Trump supporter and the man himself to do the same about violence, hate crime, and threats in his name. Trump was surprisingly gracious in his victory speech late Tuesday night, but since then his supporters have erupted in violent attacks and hate crimes on Muslims, women, black lives, the LGBT+ community, and so on, and he has been silent (again, look it up. If you can’t find it, you’re trying not to). We have to stop beating the crap out of each other, and that means that President-Elect Trump needs to condemn those actions, and if he will not, his supporters need to do so. If neither of those happen, the future is terrifying.

So, can we build a better country and world together? I believe we can, but it’s going to take work. It’s going to take trust over fear, hope over despair, mercy over condemnation, and love over hate. Let’s do better. We can do better.We can argue, we can have battles for the ages in Congress, and we can boldly support what we believe will be great for America even if it’s different than our friend’s belief, our family member’s belief, or the person next us in the pew’s belief, but for the love of God and one another, can we please stop beating the crap out of each other? I’m sending out an SOS. I hope that someone gets my message in a bottle.